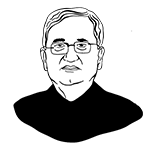 Salman Khurshid, who had held Farrukhabad Lok Sabha seat twice in the past, lost his deposit last time around 2014 when he finished fourth. This time he is up against BSP's Manoj Agarwal and sitting MP Mukesh Rajput from the BJP.

Khursheed has been stirring controversy on his campaign trail and has taken UP CM Yogi Adityanath and PM Modi head on in his speeches. The lawyer is confident about his party’s chances and has said that the party is on its way to form UPA-3.