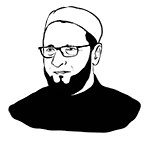 The AIMIM chief is the sitting lawmaker from Hyderabad in Telangana and has held the Lok Sabha constituency since 2004. Owaisi, who is outspoken against the BJP and PM Modi, is likely to retain his seat for a fourth consecutive time. The BJP has once again fielded J Bhagwant Rao, who had lost to Owaisi by over two lakh votes in 2014 from the seat, while Congress has given a ticket to Feroz Khan, who unsuccessfully contested the 2018 assembly elections. Telangana CM and TRS chief K Chandrasekhar Rao has backed Owaisi too, despite fielding a candidate from Hyderabad. Owaisi, who has lent support to Prakash Ambedkar in Maharashtra has said that there is no Modi wave this time and anti-BJP forces will consolidate against the saffron party.