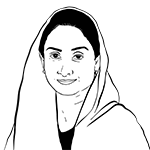 On May 19, Punjab will witness one of its toughest electoral contests in Bathinda as Union Minister Harsimrat Kaur Badal strives to retain the Lok Sabha constituency for the third time in a row by repulsing a multi-cornered attack from rival candidates. Pitted against Kaur are the Congress' Amarinder Singh Raja Warring, Aam Aadmi Party's Baljinder Kaur and Punjab Democratic Alliance's Sukhpal Khaira. She had defeated Raninder Singh, son of Chief Minister Amarinder Singh, by over one lakh votes in 2009 and repeated the feat (albeit with a smaller margin of 19,395 votes) against Manpreet Badal in 2014.