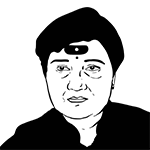 A terror accused out on bail in the Malegaon blast case, Pragya Thakur is easily the most controversial and divisive candidate fielded this Lok Sabha elections. BJP has drawn flak from all quarters, including international media, for fielding a terror accused in ongoing elections. But the saffron party has weathered the storm and stuck by the script that Congress has insulted Hindus by coining the term 'Saffron terror’. The party has defended Thakur's candidature and has maintained her arrest was result of a conspiracy to defame Hindus.

Thakur, meanwhile, has run a campaign on controversy. She began by saying that it was her curse that led to the death of Maharashtra ATS chief Hemant Karkare, the officer who lost his life in the line of duty during 26/11 terror attacks in Mumbai. Karkare had arrested and investigated Thakur for her role in the 2008 Malegoan blasts that killed 10 people. In Bhopal, a BJP bastion, Thakur is in close and keenly watched contest against former Madhya Pradesh CM Digivijaya Singh.