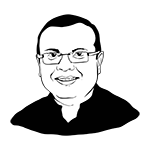 Thushar Vellappally is the NDA candidate from Wayanad fielded against Congress President Rahul Gandhi and the Communist Party of India (Marxist)-led Left Democratic Front. Vellapally is the leader of Bharat Dharma Jana Sena. Thushar, who is making an electoral debut, was planning to contest at Thrissur and Paily Vathiattu was decided as BDJS candidate at Wayanad. But in view of Congress president Rahul Gandhi's decision to contest from Wayanad, the NDA agreed to Thushar's demand that he would contest from Wayanad. The BDJS was formed in 2016. BDJS candidates contested in 36 seats, including two Assembly segments in Wayanad constituency, in the 2016 Assembly elections in Kerala. Though they did not win in any seats, the party got a vote share of 4 percent in the state while that of the BJP was 10.6 percent.