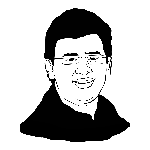 Tejasvi Surya, contesting on a BJP ticket from Bangalore South constituency, is one of the youngest candidates this election. Surya, 28, is a practising lawyer at the Karnataka High Court, and has been associated with the BJP and RSS for long. He is also the nephew of Ravi Subramanya, the BJP MLA from Basavanagudi. However, his speeches and social media posts have become controversial for his hardline Hindutva position. He has strongly advocated for a 'Hindu Rashtra', and for BJP to 'unapologetically be a party for Hindus'. In his tweets, he has called for consolidation of Hindu votes to counter 'Muslim consolidation' of votes going to the Congress.