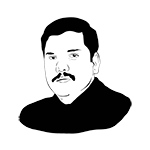 Shimoga has been a Bharatiya Janata Party stronghold since 2004, and the right-wing party has again fielded its sitting MP BY Raghavandra, son of former Chief Minister BS Yeddyurappa, to retain the seat for the fifth time in a row. The ruling Congress and Janata Dal-Secular combine too has renominated its joint candidate Madhu Bangarappa, the son of former Congress Chief Minister late S. Bangarappa. JD-S candidate Madhu had lost to Raghavendra in the November 2018 by-election by a margin of 52,148 votes in a constituency comprising over 14.3 lakh electorates. Raghavendra had won the seat for the first time in 2009, defeating Madhu's father S Bangarappa of the Congress by 52,893 votes in a triangular contest.