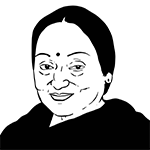 Five-time MP and former Lok Sabha speaker Meira Kumar is up against BJP MP Chedi Paswan from Sasaram. Paswan had edged out Kumar on the same seat in 2014 polls. For Kumar, it is a matter of prestige to retake the seat. Sasaram was her late father and former Deputy Prime Minsiter Jagjivan Ram's stronghold. Kumar is campaigning on her claim of being a 'daughter of the soil', but the BJP ahs deemed her an outsider, calling the Sasaram battle as one between 'son of soil' and 'daughter of Delhi'. Kumar's lack of connect on the ground could lead to yet another defeat for her in Sasaram.