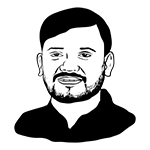 Kanhaiya has generated quite a buzz in Begusarai with his crowdfunded campaign and fiery reputation. The former JNUSU president, who shot to fame in 2016 when he was arrested for allegedly shouting anti-India slogans in JNU, has carved himself a political space and has fiercely attacked BJP and PM Modi frequently. He had to get over the initial disappointment of not being named as the Mahagathbandhan candidate, but with caste dynamics in his favour at his home seat and strong public connect, Kanhaiya could might well be in Parliament soon.