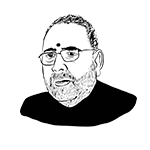 Giriraj Singh was miffed when he was moved from Nawada and dropped in Begusarai to counter Kanhaiya. The Nawada MP, known for his controversial remarks, has dismissed both Kanhaiya and RJD's Tanveer Hassan and has said he faces no competition.

However, coming in from a different seat and facing off against Kanhaiya, a local, and Hassan, a popular leader in the region, would be an uphill task for Singh. He will get a share of Bhumihaar votes in the seat, but so will Kanhaiya. With the possibility of community votes being split, Hassan stands to benefit.